Don't Let Your Babies Grow Up to Be Cowboys

I email Bump Boedeker’s bronc image to Sarah. I hope the new discovery peaks her interest in her heritage. Cowboys may not impress her much; after all, she is a Wyoming girl where Steamboat is imprinted on everything except the state flag. (Steamboat is Wyoming’s ubiquitous bucking bronc logo.) And like my son, she attended the University of Wyoming, where she was a “cowboy.” I fondly recall the UW band playing Big and Rich’s “Ride a Cowboy” at a fall football game years ago. But it’s the old Waylon Jennings-Willie Nelson song, “Mothers, don’t let your babies grow up to be cowboys” that fits Sarah perfectly. We even sneaked our grandson his first pair of boots. I wait to hear her reaction. 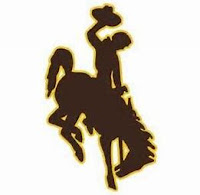 My Ancestry inquiries finally pay off! While most folks respond that they cannot help, one individual puts me in touch with Hank Boedeker’s grandson, the last living person to have actually known the man. Hallelujah! Introductions are now in order. Much to be done here.


I also receive John Foster’s giclée of “The Bronc.” I am delighted with it, and with the digital photo that originated the painting, I feel that I am closer to the Boedeker family, their story. Foster is a delightful man, wonderful artist, conscientious writer--and UFO believer. Besides viewing his lovely mountain-scapes, sculptures, and photographs, I spend time reading about alien encounters that began in the 1950s near, you guessed it, Dubois, Wyoming. He describes an event in Dubois during his summer break from the University of Nebraska below

"My friend and I finally landed jobs with the US Forest Service as fire guards. I was hired to be a member of “the trail crew,” clearing and improving trails in the deep wilderness with horses, and my friend was to be a fire guard and campground maintenance man using an old Dodge Fire Wagon truck. He was to stay at 'The Sheridan Creek Fire Guard Cabin,' a beautiful temporary cabin that sat 11 miles west of Dubois, near the spot where Sheridan Creek flowed into the Wind River. It was there where we experienced the most bizarre, important, historical UFO encounter of my life. It lasted from well before sunset until well after sunrise."

Got your attention? John has written books about these experiences, spoken to large audiences, and participated in UFO studies sponsored by prominent universities. John is now retired, having been in charge of ore extraction at a test uranium mine. He is definitely no crackpot. Having just read about UFO sightings near Nogal, NM, where we live part-time and having grown up hearing about the Roswell alien crash, I try to keep an open mind. John’s art may be viewed at https://johnfosterart.com/. His ufo studies and writings at https://johnfosterufos.com/.

I check census records to see where Bump and Hank Boedeker were in 1930 and 1940. (The 1950 census has not come out yet). There Bump is with his wife Mary, living with Effie M. (Dot) and Perry Lewis on their ranch in Freemont County, WY, in 1930. Bump is working as a ranch laborer. This would have been the same time that the bronco photograph was taken in Pinedale.

By 1940, Dot’s family is renting in Lander, her husband working for the WPA. Bump and Mary, however, moved to Dubois as early as 1935. Bump has no regular job or reported income, five children to feed, and likely an ailing wife whose physical and mental debilitation is alarming and frightening. He is doing itinerant work, having worked part of March 1940. Like millions of others, the Great Depression changed the trajectory of the Boedeker families’ lives. Still, two more children would be born, including Sarah’s grandmother. Within seven years after the last birth, Mary Boedeker would be dead. I envision the tragedy settling into the ebb and flow of their daily lives. Still, my book will not be about this Boedeker family. I move on to Hank, Bump’s father.

Eighty-one-year-old Hank is still living in 1940, also in Dubois, renting a farm, with two children and his wife Maggie. No sign of him in 1930. These details provide a skeleton that will need to be fleshed out as I work backwards to Lawman Hank Boedeker and his legend.

One last observation from John Foster’s communications. He mentions being told that Bump Boedeker ran with Butch Cassidy’s son, who lived in Butch’s former cabin in Dubois. Foster reports Dot’s stories of how they were practical jokers, causing some excitement in the small community. Butch Cassidy had a son? This would have to be verified. One other detail, I record. “The cabin was about a quarter of a mile or a lot less to the west of the road that led up Horse Creek, approximately a quarter to half a mile away from town.” The Boedekers lived up Horse Creek.